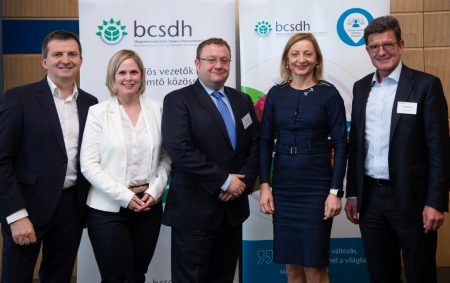 Attila Chikán Jr., CEO of ALTEO Plc., was re-elected as president by the Business Council for Sustainable Development in Hungary’s assembly.

Budapest, February 26, 2019 – Attila Chikán Jr. was re-elected as president by the general assembly of the Business Council for Sustainable Development in Hungary. Under Mr. Chikan’s three years of leadership the number of member companies has increased by 27. These 83 companies together produce more than 30 percent of Hungarian GDP. The visibility of the organization to governmental stakeholders and to a wider audience has also increased.

The re-elected president’s work will be supported by a four-member board. Its re-elected members are Zsolt Jamniczky, Member of the Board of Directors of E.ON Hungaria, Dr. Ágnes Fábián, Managing Director of HENKEL Hungary, and Zoltán Gazsi, Managing Director of Eisberg Hungary. The new member is Gréta Nagy, Managing Director of DANDELION, as elected by the assembly. She follows Dr. Thomas Nareshubert, Executive Director of BASF Hungaria. The mandate of President and the Executive Board is for three years.
The management of BCSDH will remain in the hands of Irén Márta. 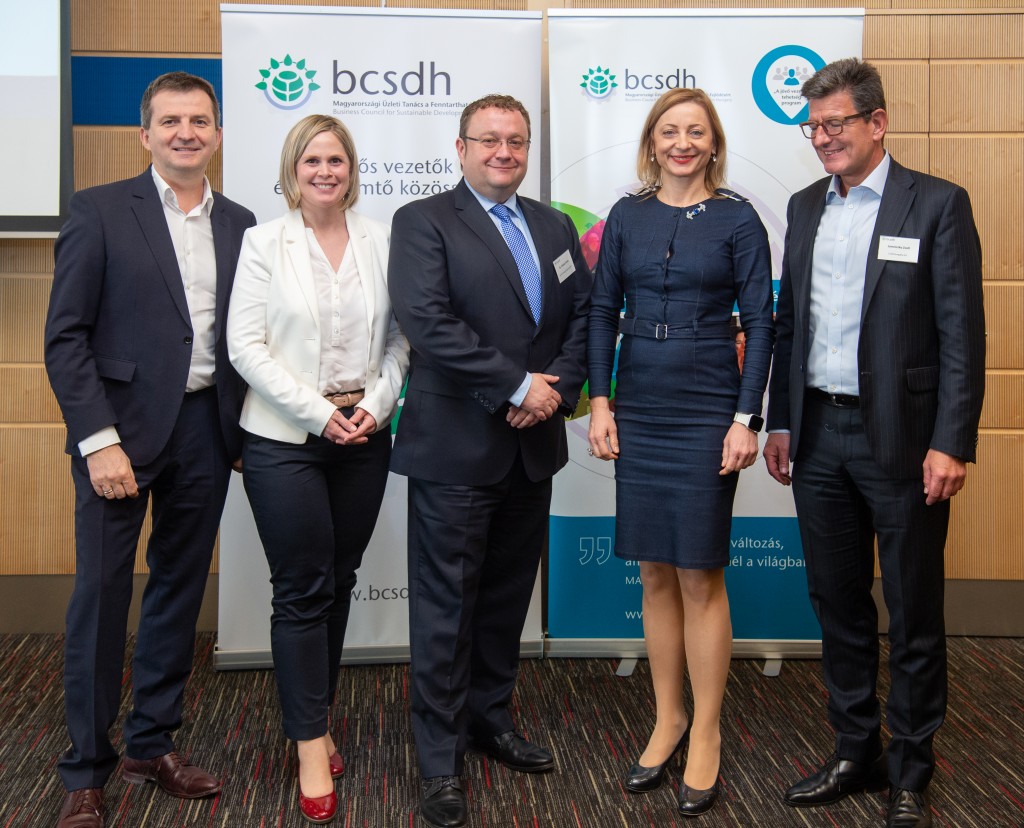 The re-elected Supervisory Board Members are Orsolya Pallaghy and Dr. Orsolya Fazekas. A new member is János Kocsányi, CEO of Graphisoft Park SE, elected by the assembly to follow Sándor Lakatos, General Manager of INEST. 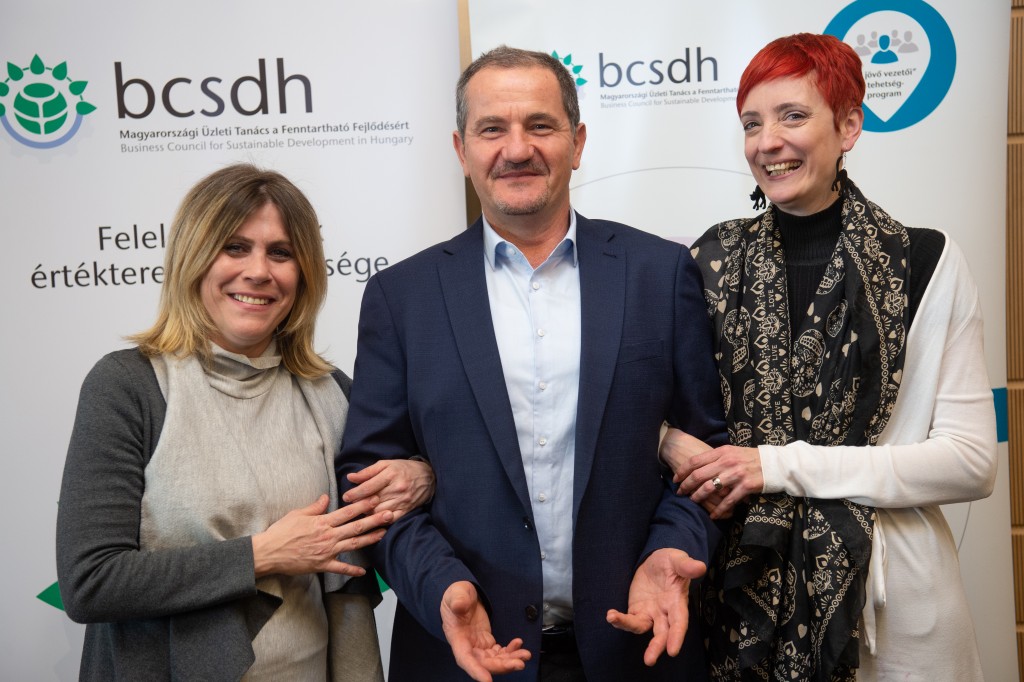 ’I believe that the organization is on the right path’ – started the evaluation of the last three years by Attila Chikán Jr., President of BCSDH – ’our organization is becoming more and more effective each and every year, considering that all the programs carried out by BCSDH –  like Action 2020 Hungary and the Future Leader Talent Program – have achieved outstanding success these past years.’

BCSDH has also been able to increase its visibility and publicity concerning governmental stakeholders as well. A permanent support position in the National Sustainable Development Committee (NFFT) has been established, and BCSDH has developed a very strong professional partnership with the Presidential Office as well. Moreover, it was a great achievement of BCSDH that the organization, along with its member firms, took part in developing the Independent National Sustainability report of Hungary: more precisely, the section on the business sector which focused on the Implementation of the Sustainable Development Framework 2030 and its successes so far, at the request of the Ministry of Foreign Affairs. 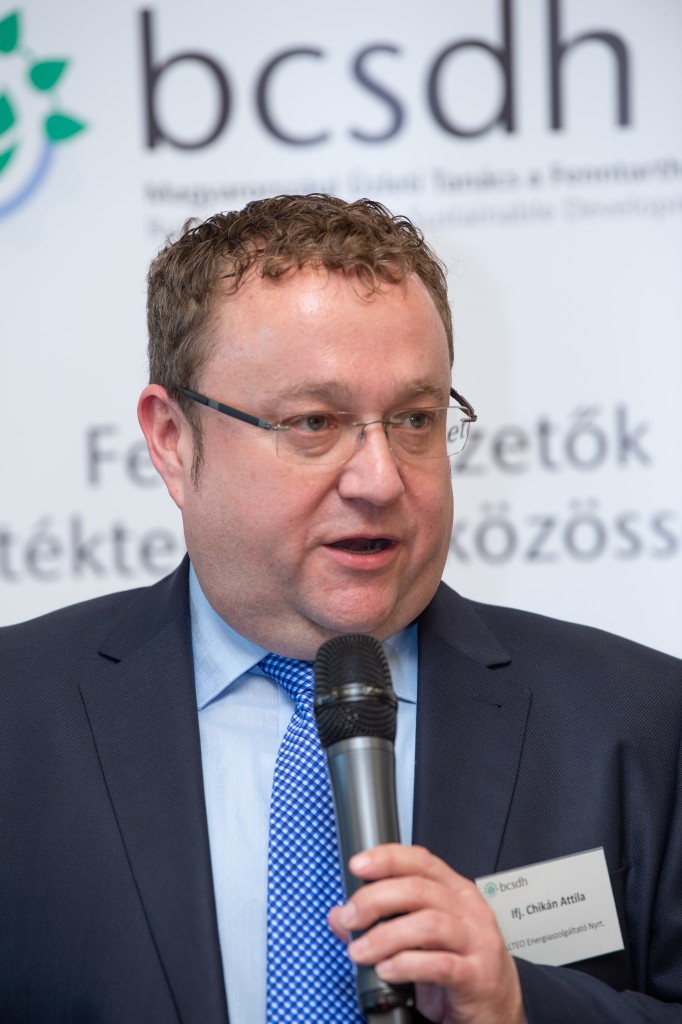 ’However, the creation of the Circular Economy Platform, an initiative launched with the support of BCSDH, the Dutch Embassy, and the Ministry of Technology and Innovation, is what I consider the greatest achievement of my presidential term. The aim of the platform is to create unity and share knowledge in co-operation with the corporate, governmental and scientific sector. Since its launch, more than 55 member firms have signed the declaration of agreement, and this number is constantly increasing.’ – Attila Chikan Jr said, in highlighting the greatest successes of previous years.

’As for the future, we would like to maintain the progress that we have made in the past while making further developments. We have quite a few challenges ahead of us: In addition to concluding and evaluating the Action 2020 program, we need to keep up progress in developing a new program by 2030 which will be linked to SDGs. We have a lot of work ahead of us.’ – highlighted Attila Chikan Jr. – ’Furthermore, my plan is to solidify and expand our governmental and international partnerships, as the mutual support of professionals can help us immensely in achieving our future goals. It is my strongest belief that BCSDH must be open towards smaller firms as well in order to educate more companies about the role of sustainable development.’ – added the re-elected president.

The new leadership of Business Council for Sustainable Development in Hungary

Mr. Chikán has a degree in economics and more than a decade of professional and leadership experience in the field of energy. The ALTEO Group, led by Mr. Chikán since its establishment, has become one of the sector’s most important actors. The company’s core businesses are smart energy management services for industrial firms and renewable energy production. ALTEO has issued stocks on the Budapest Stock Exchange since 2010 and was recently listed in the Prime Equities category. The company is one of the leading domestic representatives of an impact investment strategy aimed at making profitable, sustainable and socially responsible investments.

Chikán Attila Jr. is committed to the principles of sustainability: he runs his own blog under the name Chikansplanet. He is also actively participating in BCSDH’s professional work and has served as the president of BCSDH since 2016.

A member of Henkel Magyarország Kft’s team since 1996, Dr. Ágnes Fábián became a business unit executive at Henkel Adhesive Technologies by moving up through the company hierarchy and spending nine years in an international environment, besides which she has also been CEO of Henkel Magyarország since 2011. Dr. Fábián began her career in 1990 at Biogal Gyógyszergyár Hélia’s cosmetics sales division. Later on, she worked as regional sales manager at Maybeline’s and Loctite Magyarország when Henkel acquired the company. Her aim is to make even more leaders realize that sustainability and value creation for customers are inevitably components of good performance. Operating sustainably is now a requirement that cannot and should not evaded.

Managing Director of Eisberg since 2007. After graduating from the University of Agricultural Sciences in Gödöllő, Zoltán worked for the National Institute for Agricultural Quality Control, followed by 14 years of working in a multinational environment at Syngenta. After leading the Experimental Station at Ócsa, he had various marketing- and project-coordinator jobs in increasingly large fields of operation, including on almost all continents. He believes that the good examples seen at companies have an impact on the families of employees and on the direct and indirect environment of the company, and that these impacts are inevitably the start of significant changes at the level of society.

Zsolt Jamniczky
Member of the Board of Directors,
E.ON Hungária Zrt.

E.ON Hungária Group’s Director for Central Affairs since 2007 and Deputy CEO of the company since 2010. After completing his studies, Mr. Jamniczky served as an adviser in the Foreign Relations Office of the Hungarian National Assembly. In 1996 he was appointed Director for Corporate Affairs at Reemtsma Hungary, a Debrecen-based tobacco company. This was followed by the Director for Corporate Affairs position at Philip Morris Hungary until 2005, while between 2006 and 2007 Mr. Jamniczky was Philip Morris International’s Director of EU Government Relations at the company’s Brussels office. He studied at the Budapest University of Economics and the Eötvös Loránd University of Sciences. Mr. Jamniczky’s main fields of interest include corporate sustainability and corporate social responsibility in a constantly changing economic and social environment, and innovation in the energy sector.

Zsolt Jamniczky was awarded the Knight’s Cross of the Order of Merit by the President of Hungary in 2016.

Founder and Managing Director of Dandelion Kft. since 2006.

Gréta graduated as an environmental engineer from the Széchenyi István University, and also from an Environmental Management Engineering and Economic Analyst MBA at the Budapest University of Technology and Economics.

She has participated in environmental and process-optimization projects over the last twelve years, and her colleagues have developed innovations such as the methodology for calculating a company’s ecological footprint, as well as the Greenlex software, which is a self-assessment software for regulatory compliance. The company’s latest development is WorksStressMeter, which may be used to measure the stress level of employees and organizations. Gréta has been participating in BCSDH’s work as a consultant.