After a 4-percent bottle weight reduction in 2018, plastic will be further reduced by 4 percent in production in 2020 by Coca-Cola Hungary. As a result of an investment of HUF 100 million the company will use 600 tonnes less plastic annually corresponding to the weight of 24 million PET bottles. The bottles produced by the company are already 100 percent recyclable, and the proportion of recycled plastic is planned to be raised to 50 percent by 2030.

Due to a technological development of HUF 100 million, Coca-Cola Hungary will reduce the amount of plastic used in production by another 4 percent in 2020. The company will use a total of 600 tonnes less plastic annually corresponding to the weight of 24 million PET bottles. The investment will help the company reduce its ecological footprint significantly as considerably less oil will be used to produce new bottles and less energy will be needed for the transportation of products due to the bottles being lighter. Coca-Cola Hungary decreases PET bottle weight by another 4 percent

Lightweight packaging will be introduced into the market gradually: new 1.5l and 1.75l bottles are already available and they will soon be followed by the new 0.5l and 1.25l bottles too. To comply with strict quality standards, the shape of lightweight bottles has been slightly modified, but they remain as solid and robust as their predecessors were.

Coca-Cola Hungary has already done a lot to reduce plastic packaging usage and its impact on the environment in the last few years. PET bottles of the company have been 100% recyclable for a long time and due to recent investments, the amount of plastic needed to make one PET bottle has decreased by 15 percent as compared to 2010. The company also increases the proportion of recycled PET in its bottles which is currently 27 percent on the average. PET bottles made of recycled plastic may have a carbon-dioxide footprint 80 percent smaller than of the bottles made of petroleum products, what more, the total ecological impact of recycled plastic bottles may be even smaller than the aluminium cans.

Furthermore, as of 2021, Coca-Cola Hungary will replace the plastic packaging on can multipacks with an innovative cardboard-based packaging solution, and it also aims to introduce 100% recycled PET bottles in its portfolio.

According to the joint World Without Waste strategy of the global The Coca-Cola Company and Coca-Cola HBC present in 28 countries, companies will recollect the equivalent of 100 percent of the packaging waste they placed in the market by 2030, and they will increase the percentage of recycled plastic in their packaging to 50 percent. 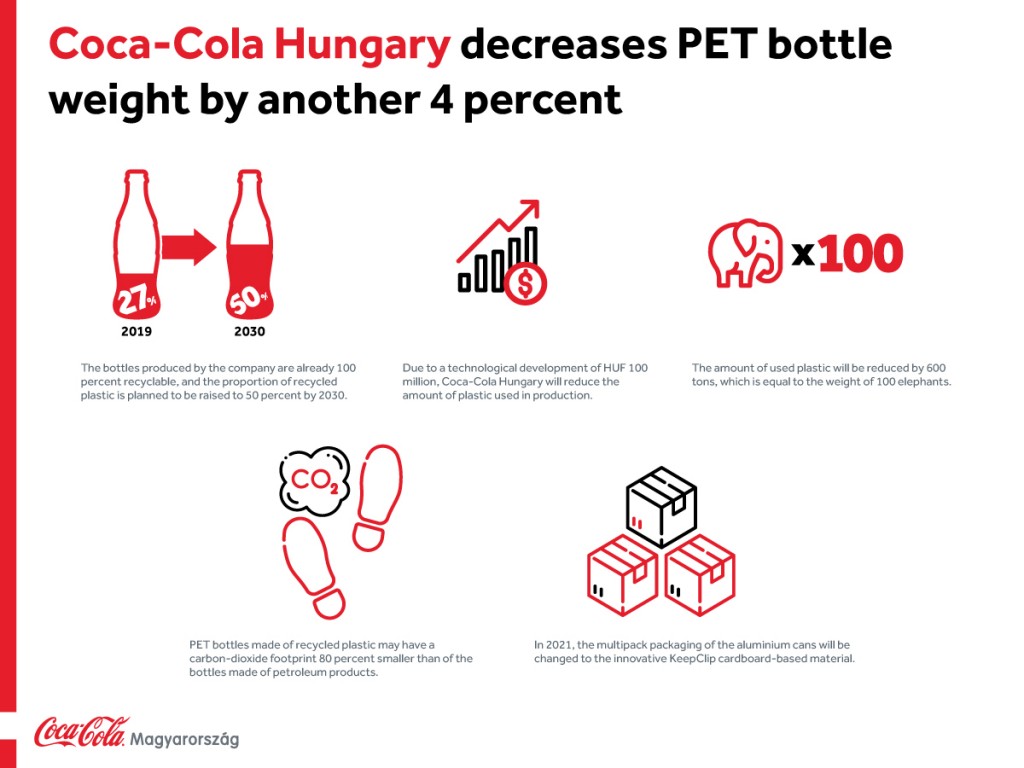 The future is determined by what we do now, and the window of opportunity is closing fast – Regional Management Consultation in Hungary on the situation of sustainability