Home / News / How can we achieve the Net Zero target by 2050? Unique collaboration for a carbon-neutral economy in Hungary 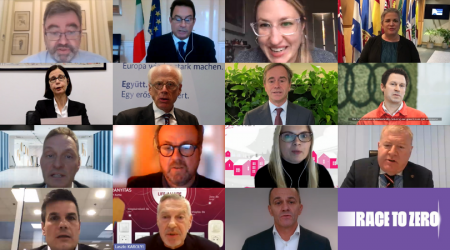 Budapest, 3 December 2020  ̶  In a unique collaboration, the embassies of six countries and the Hungarian Business Council for Sustainable Development (BCSDH) have teamed up with the support of the Ministry of Innovation and Technology to help accelerate the transition to a carbon-neutral economy in Hungary by 2050, thus taking an important step to tackle climate change.

The purpose of the event, organized by the Business Council for Sustainable Development in Hungary (BCSDH) and the British Embassy, in partnership with the Italian Embassy, and in collaboration with the Embassies of France, ​Germany, Canada and the Kingdom of the Netherlands, ​​was to encourage the domestic business sector to shift to a more sustainable, carbon-neutral economy after the pandemic. The event built momentum for the United Nations’ “Race to Zero” campaign and the COP26, the UN’s Climate Change Conference hosted by the UK in November 2021 with the aim of raising ambitions on decreasing global greenhouse gas emissions.

“In 333 days, the United Nations’ 26th Climate Change Conference will open in Glasgow, hosted by the UK in partnership with Italy. This remaining year of preparation for COP26 must also take on board the effects of the COVID-19 pandemic. At COP26, we must unite the world on a path to a zero carbon economy as we build back greener from COVID-19” ̶  said British Ambassador to Hungary Paul Fox in his opening remarks.

“Italy is a front runner in the Race to Zero campaign to completely decarbonise the global production system and foster inclusive and sustainable growth. To reach our goal by 2050, we need to act now!” – Italian Ambassador to Hungary Massimo Rustico said in his keynote address.

In her opening remarks, Barbara Botos, Deputy State Secretary for Climate Policy of the Ministry for Innovation and Technology, spoke about the climate protection law recently passed by parliament, according to which Hungary has committed to achieving climate neutrality by 2050, thus balancing the emissions and sinks of greenhouse gases. To meet the 2030 targets also defined by the law, namely to achieve 40% emissions reduction by 2030 and that the ratio of renewable energy sources in Hungary should reach 21% by 2030, the government will introduce measures including support for the energy-related development of domestic companies and the issuance of Green Bonds.

The Race to Zero is the UN-led campaign for a zero-carbon world. 1,128 businesses including the likes of Facebook, Tesco, LafargeHolcim and Magyar Telekom, and 45 of the biggest investors have joined the global Race to Zero campaign, along with over 450 cities and 550 universities. Businesses of all sizes and across all sectors have a clear role to play in climate action, in line with the Paris Agreement and in the lead-up to the COP26 in Glasgow in November 2021.

Jen Austin, Director of Policy and Strategy, COP26 High Level Climate Champions team, gave an insight into the goals of the Race to Zero initiative, and a global overview in the run up to COP26.

“All companies are affected by climate change and all companies have the opportunity to influence it positively. Stabilizing global warming under 2, but preferably 1.5 degrees Celsius requires the radical reduction of greenhouse gas emissions as soon as possible. Transitioning our economy first to low-carbon, then carbon-neutral by 2050 is the way to achieve this objective. Businesses will play a key role in this process. Is there a better time to start it than now?” – Attila Chikán Jr., President of BCSDH said at the event.

“Five years ago, by adopting the Paris Agreement, our countries committed to decreasing their greenhouse gas emissions but it was only the beginning. The urgency remains and it’s up to us, governments, private companies and citizens to turn these commitments into reality. This is our shared responsibility!” – French Ambassador Pascale Andréani said in her closing remarks.

“Fighting climate change, climate protection is teamwork. Our common goal is to achieve climate neutrality by 2050, where all contributions count. Renewables are taking over in the power sector in Europe. Next steps in energy transition: replace fossil fuels in transport, industry and heating. Hydrogen will play a crucial role” – German Ambassador Johannes Haindl said. Germany holds the rotating presidency of the European Union from 1 July 2020 which sets the standard for achieving climate neutrality.

“We are proud to be collaborating with the British Embassy and our other partners on the Race to Zero Business Ambitions Forum and working for a carbon neutral world by 2050. Climate change is a global problem and it will take a coordinated response to find global solutions.  Canada continues its work to reduce emissions and build resilient communities and a low carbon economy, knowing the strong connection such efforts have with long-term health and financial well-being.” – Canadian Ambassador Caroline Charette said in her closing remarks.

“The Netherlands deems climate actions very timely and important that is why it will host the Climate Adaptation Summit on 25 January 2021, focusing on how we can adapt globally to the changing climate and what solutions need to be scaled up further. Please, join this on-line event which will mobilise governments, companies, organisations and citizens worldwide in order to set out a roadmap towards a climate-resilient future by 2030!” – Dutch Ambassador René van Hell said.

“Half of our member companies already have strategic climate protection goals, commitments and programs. But it is important that as many players in the business sector as possible set ambitious carbon reduction targets, draw up an action plan for this and regularly analyse the results and measure their carbon footprint. This is included in the climate recommendations of the BCSDH Action2020 Hungary program. The purpose of today’s Race to Zero Business Ambitions Forum is that leading domestic companies from several industries demonstrate  their best practices and commitments, thereby encouraging domestic companies to make similar ambitious commitments towards a carbon-neutral economy” – Irén Márta, Managing Director of BCSDH said in her closing speech. 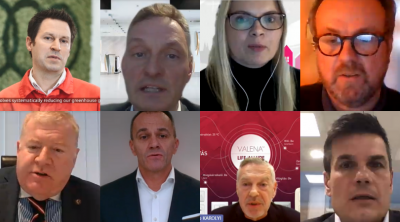 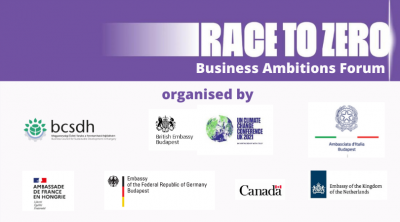