Home / News / Lagging companies take a serious risk – ‘What is the next step after COP26?’ 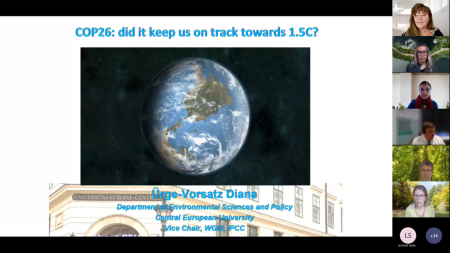 The vast majority of the world wants and is ready for the energy transition. The voices protecting the status quo are weakening and it is a financial risk if a company doesn’t join to this train on time. While in the media we heard mostly about the 400 private jets and the closing document, there are further key take-aways what should be highlighted. While COP 26 didn’t ensure yet the decrease to the 1.5 °C with all the commitment and pledges, yet we are going to right direction with a speed we have never experienced before.

‘What is the next step after COP 26?’ working group meeting, our guest speaker, Prof. Dr. Diána Ürge-Vorsatz, climate researcher and professor of CEU shared her firsthand experience and takeaways from the COP26 global event, highlighting the import role of the business leaders as they are the ones, who are actively working on the implementation of the energy transition.

Three weeks ago, 2/3 of the global emission was covered by net zero targets, today it is 90%. A clear message for all the companies as laws are getting introduced. NDCs (Nationally Determined Contributions) were mostly increased, having India and China joining in is considered one of the key achievements of the event, while there are some disappointing contributors as Switzerland, Australia or Brazil who stepped back and became less ambitious than before.  Big loopholes got closed but some smaller ones remained open regarding the Paris Agreement’s article 6 on carbon trading. 80 bln USD fund was created for the developing countries but without global financial facility behind to ensure transparency. Individual sectoral pledges were introduced, a final document and “Coalition of the willing” shaped on coal phase out, greening finance, ending deforestation, methane pledge and electric vehicles – these are only meaningful if they come in addition to NDCs, but many has still key countries and payers missing. – commented Diána.

Could have all these been achieved via Zoom? – the answer is clearly no. COP events are becoming more as a climate jamboree with 50.000+ participants, attracting all type of voices to deliver their messages while the delegates are locked-away for the negotiation phase. The question is raised again… do we need so many people to be present every year? Possibly don’t. Companies yet again have the opportunity to shape a trend, simply by shifting intra-European business travel to train to set an exemplary travel pattern.

What all business leaders need to keep on mind:

In 2015, ahead of the Paris Agreement, the CAT estimated a warming of 3.6 °C based on the 2015 policies, and the submitted targets would lead to 2.7 °C. Six years later the warming of current policies has now come down to 2.7 °C and if governments achieve their 2030 NDC targets, temperature increase could be limited to 2.1 °C. We came this far together, and we won’t stop here.

Meeting the 1.5°C target cannot be achieved without the circular economy