Home / Member News / My Coffee, Our Planet” competition has ended – the winning designs will soon be displayed on millions of paper cups in Coca-Cola HBC Hungary’s vending machines

My Coffee, Our Planet” competition has ended – the winning designs will soon be displayed on millions of paper cups in Coca-Cola HBC Hungary’s vending machines

Budapest, 11 November 2021. – The “My Coffee, Our Planet” design competition, which was organized by Coca-Cola HBC Hungary and Moholy-Nagy University of Art and Design (MOME) for students of the university, has ended. The winning designs are to be used on the 100 percent recyclable paper cups that will gradually replace single-use plastic cups in the company’s hot drink vending machines during the first half of 2022. More than 1,000 hot drink vending machines across the country will offer tea, coffee, or hot chocolate in fully recyclable paper cups with a design that promotes consumer awareness.

The surface of the 100 percent recyclable paper cups will be used for educational purposes. The beverage company aims to raise consumer awareness about sustainability and the importance of a circular economy by promoting selective waste collection and the recycling of paper cups so that packaging can remain part of the cycle after its primary use. The new look of the paper cups was designed by MOME students in a competition organised jointly with the university. Following the preliminary discussions and mentoring sessions, entries were evaluated on the 5th of November by the jury: Orsolya Nyilas, Customer & Community Partnership Manager at Coca-Cola HBC Hungary, Sándor Horváth, At-Work Manager at Coca-Cola HBC Hungary, Balázs Vargha, Head of Media Institute at MOME, Réka Matheidesz, Head of EU Projects at MOME, and Lídia Gulyás, social media specialist and illustrator. 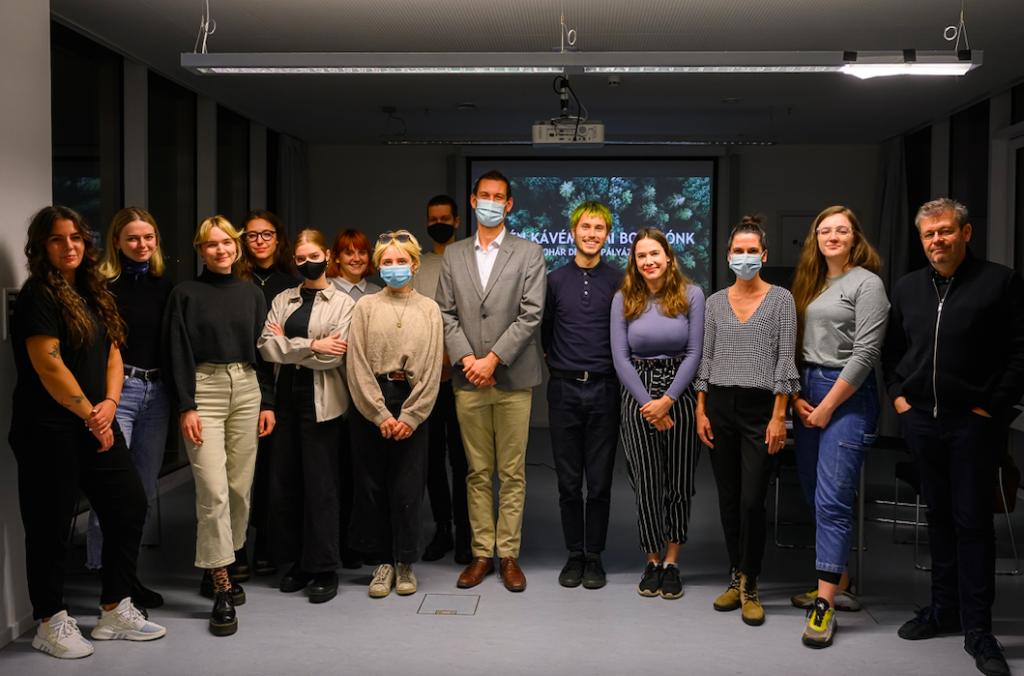 Each of the 10 shortlisted entries took a unique approach to sustainability and the circular economy, with some using a playful, even humorous idea, while others came up with interactive graphic solutions. Due to the high quality of the entries, the jury eventually decided on three grand prize winners – their designs will be featured on paper cups from next year. The jury believe that the three designs complement each other, addressing different target groups and forming a coherent portfolio. “Nearly fifty students from MOME Media Institute applied, 10 of them were shortlisted and invited to create the actual design. The message of the competition and sustainability are very important topics – and the dedicated and sophisticated high-quality work of our students has reflected this. It was a difficult decision for the jury, but it was also very rewarding to be here, because I got a lot of feedback from the other judges about our students’ work, which made me very proud,” said Balázs Vargha, Head of Media Institute at MOME.

“The key phrase of my concept was that recycling is like a child’s game, so I used this as a starting point to create familiar games that are easy to play on paper. It is a playful way to demonstrate the recycling process,” said Zsuzsanna De Jong, one of the winners of the competition and a sophomore student at MOME. “With this dynamic-abstract graphic style that I represent, I was able to present the circulation that had become the basis of my concept,” said Nikoletta Mihalik, whose designs will also be displayed on the paper cups. “I designed a hugging figure on the cups: as soon as I looked at the cup, I started playing with the idea of the circular shape, so I created this figure who loves his coffee and symbolically the whole planet so much that he hugs it”, said Soma Gonda, a master’s student at MOME, the third winner of the competition, who created a graffiti-styled world on his designs.

“The switch to paper cups is important for all involved: our company will use around 30 tonnes less plastic, our consumers will get an awareness-raising new design and experience at our hot drink vending machines, we support our customers’ sustainability efforts and we work with young talents during the design process,” Sándor Horváth, At-Work Manager at Coca-Cola HBC Hungary and a member of the jury, summarized the importance of the project.

The winning designs and the photos from the event can be viewed on this link.

Coca-Cola HBC Hungary is a member of the Coca-Cola HBC AG Group, which serves 615 million consumers across 28 countries. The Dunaharaszti-based company operates two facilities in Hungary that employ 1,050 people. Its overall production line provides jobs for nearly 13,000 people. Coca-Cola Hungary has so far invested HUF 125 billion in the country. The company is one of the most important players of the food and beverage sector, it ships its products to 26 countries. Nearly two-thirds of the materials used in production come from domestic suppliers.

Since its foundation 140 years ago, the most important value of the Moholy-Nagy University of Art and Design (MOME) is its open mind-set to the world, in which respect for tradition, aspiration and promoting development all take part equally. MOME has always played a decisive role in the development of Hungarian design life and has been since its creation an outstanding institution of the local art and design scene. Our history has made the university a prominent part of the cultural and artistic life of Hungary. Most of our graduated students succeed to obtain major roles in their industry and the university itself serves as a professional gathering point on the international level as well. Our mission is to find and provide answers to today’s challenges with the tools of art and design, in cooperation with representatives of other fields. The ambition of MOME is to become Central Europe’s leading educational centre for innovation and creative art by 2030.

The evidence is clear: the time for action is now. We can halve emissions by 2030.

How and why to measure the circularity of your company?