Home / News / Not enough for a carbon-neutral economy. Can the business sector make a greater effort? – Towards Net Nero Survey results

Not enough for a carbon-neutral economy. Can the business sector make a greater effort? – Towards Net Nero Survey results 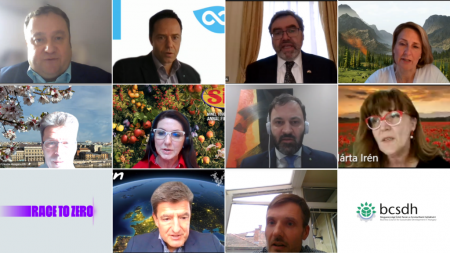 Budapest, 23 March 2021: For the first time, research has been conducted on the status quo of the Hungarian business sector in relation to carbon-neutral operations. The picture is not so bright – although 31% of leading companies already have net zero emissions targets, this figure is below the international benchmarks and below the level required for real change, according to the Towards Net Zero research of the Hungarian Business Council for Sustainable Development (BCSDH), with the professional support of Deloitte.

Achieving net zero emissions is a major challenge of our time, and the research presented at the Net Zero Ambitions Forum, co-organized by BCSDH and the British Embassy, can create a basis for the next steps. At this event, seven of Hungary’s leading companies also presented their related commitments.

Sixty percent of the companies that were surveyed have emission reduction policies, and 30% plan to have one in the next five years. Only 10% said they did not even plan such measures. But only 50% of companies have a specific target for reducing greenhouse gas emissions. 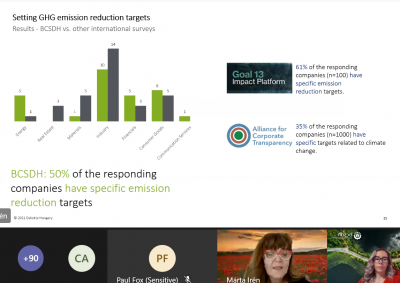 “It’s good to see that BCSDH member companies are at the forefront of setting climate-related goals, but our job is to mobilize a wider business community. Every company is affected by climate change, and every company has the opportunity to positively influence it. The goal is no longer just reducing greenhouse gas emissions but achieving net zero emissions. Research has shown that there is a high level of uncertainty, a lack of knowledge, and often an inadequate allocation of resources within companies. By presenting opportunities and good examples in this area, BCSDH can support its member companies and the wider business environment” – said Attila Chikán Jr., President of BCSDH. “Accelerating the transition to net zero operations requires a broader partnership that includes government and legislative support, and the Net Zero Advisory Board we launched in January can help with this,” he added.

Research has also shown that in order for companies to set real net zero targets, they need to take big steps in terms of measuring emissions and introducing an internal price for carbon. For those who are just starting the process, reducing waste, investing in energy efficiency, switching to renewable energy, and increasing resource efficiency can be the first steps. But it is important to emphasize that we need to go much further than this to create a real net zero-emission economy in Hungary by 2050.

Efforts to achieve the Paris climate targets need to be significantly increased in Hungary and around the world. One of the goals of COP 26 in November is to set targets for achieving net zero in a uniform and scientifically sound way.

“As hosts of the COP26, the UK is working with businesses, governments, and civil society to drive action across key sectors of the economy to reduce emissions, adapt to the effects of climate change and strengthen resilience, while also striving to “build back better” as we recover from the Covid19 pandemic”– highlighted Paul Fox British ambassador, member of the Net Zero Advisory Board. 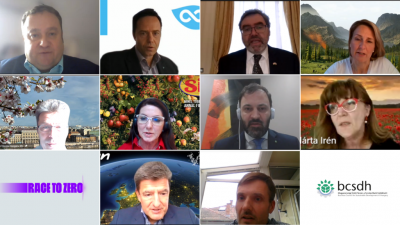 Seven of the leading companies included in the research presented their specific commitments:

Daikin aims to achieve zero net emissions by 2050. To this end, it is using more energy-efficient, less environmentally damaging technology to create products with longer life cycles. As an important player, Daikin wants to implement the reuse and recycling of refrigerants throughout the industry.

By 2030, all of E.On’s buildings will be carbon neutral, and its fleet will be electric. It undertakes to reduce its carbon emissions by 30% by 2030 and achieve a 50% reduction in terms of customers’ emissions.

Grundfos aims to reduce its own CO2 emissions and its water consumption by 50% by 2025, and the company aspires to become “climate positive” by 2030. By 2030, they will have contributed to providing safely managed drinking water to 300 million people in need. In addition, through water efficiency and water treatment, they will have saved 50 billion m3 of fresh water

K&H Group undertakes to operate in a climate-neutral manner from 2021, and to reduce greenhouse gases by 80% and to switch to 100% green electricity by 2030.

LeasePlan will already be implementing its green fleet by 2021 and aims to further reduce its environmental impact through a number of customer and consumer-oriented measures by 2030.

Nestlé aims to achieve net zero emissions by 2050. It will reduce its emissions by 30% by 2025, and by 50% by 2030. It aims to achieve this target, among other ways, through the use of renewable energy, an electric car fleet, and the introduction of new technologies, packaging materials, and recipes.

SIÓ-Eckes (Eckes-Granini Group) undertakes by 2030 to set Science-Based Targets to help achieve the 1.5o target. It is committed to reducing greenhouse gas emissions by 50%, and switching to the use of 100% R-PET by 2030.

The Race to Zero is the UN-led campaign for a zero-carbon world. Close to 1,400 businesses, including the likes of Facebook, Tesco, LafargeHolcim and Magyar Telekom, and 74 of the biggest investors have joined the global Race to Zero campaign, along with over 454 cities, 23 regions, and 569 universities. Businesses of all sizes and across all sectors have a clear role to play in climate action, in line with the Paris Agreement and in the lead-up to the COP26 in Glasgow in November 2021.

Over the coming years, every sector in every market will be transformed as the transition to a low-carbon economy is underway. Committing to the Race to Zero goals of net zero carbon emissions by 2050 is also taking the steps necessary to protect and grow your business by reducing costs, by enhancing access to investor capital, by staying ahead of policies and regulations to limit GHG emissions, by increasing your business’ preparedness to external shocks, and by leading on tomorrow’s innovation and transformation.

Why is the phone’s dialing sound different when calling from abroad? – an exciting lab tour at Nokia at the Future Leaders Alumni meeting

The circular economy is key to halting biodiversity loss