Home / News / Will we take the opportunity? – ‘Race to Zero Carbon’ – What can companies do? 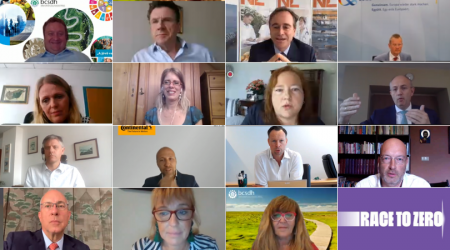 The purpose of the event, organized by the Business Council for Sustainable Development in Hungary (BCSDH), the British Embassy, ​​the Embassy of the Kingdom of the Netherlands and the German Embassy, ​​was to encourage the domestic business sector to shift to a more sustainable, carbon-neutral economy after the pandemic.

The event built momentum for the “Race to Zero” campaign announced by the UN and COP26 in 2021, at which governments need to ratify the 2015 Paris Agreement.

‘If there is something to be glad about concerning the pandemic, then it is that our planet has been able to take a breath for a moment. Air and water have become cleaner everywhere on Earth. But still, climate change has not stopped. The forced economic break allows us to take steps towards achieving such things in which we have achieved very little so far. The positive climate impacts we have experienced should make governments and companies realize that we have to shift to ‘climate neutral’ operations as soon as possible’ –Attila Chikán Jr., President of BCSDH, said in his inspiring opening speech.

During the event, speeches were given by British Ambassador Iain Lindsay, host of COP26 in Glasgow in 2021, Dutch Ambassador René van Hell, a committed supporter of the circular economy, strategic partner of BCSDH, and Klaus Streicher, Deputy Head of Mission of the German Embassy in Budapest, speaking on behalf of Germany – which is planning on achieving climate neutrality and is next in line for the EU presidency. The purpose of the speeches was to encourage domestic companies to commit to faster and more ambitious reductions in greenhouse gas emissions.

Dr. Barbara Botos, Deputy Minister of State for Climate Policy, spoke about the climate protection law recently passed by parliament, according to which Hungary has committed to achieving net climate neutrality by 2050, thus to balance the emissions and absorption of greenhouse gases. Among the goals defined in the law, we can find the issuance of a Green Bond, and support for the energy-related development of domestic companies, thereby supporting the goal that the share of renewable energy sources in Hungary should reach 21% by 2030.

’The coronavirus may be our last warning, pointing out that if we do not change our relationship with nature radically, the survival of civilization is highly questionable. The health and economic crisis caused by the coronavirus is just a foretaste of what climate change will cause soon.’ – said Prof. Dr. Diána Ürge-Vorsatz, Vice-Chair of the Working Group of the United Nations Intergovernmental Panel on Climate Change (IPCC). ‘At the same time, the crisis and economic recovery have created many new opportunities to accelerate the economic and institutional changes needed for decarbonisation, but these were very difficult to mobilize before the crisis. It’s up to us whether we return to the outdated twentieth-century “normal,” or build a new, more livable, healthier, cooler and happier “new normal.”’- she added.

‘Half of our member companies already have strategic, climate protection goals, commitments and programs. The purpose of today’s event is to encourage companies to implement the recommendations of our Action2020 Hungary climate program as soon as possible by presenting the concrete activities of leading companies. These recommendations include the introduction of carbon footprint calculation, regular analysis of the results, and preparation of action plans for effectively reducing greenhouse gas emissions’ – said Márta Irén, Managing Director of BCSDH.